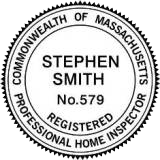 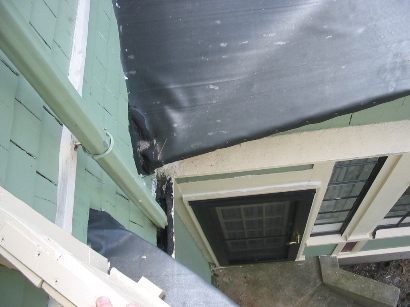 Small wooden gutter unable to handle water run off from roof above this has caused undo amounts of water to over flow onto stoop below. do to the improper pitch of the stoop the water is running back against the home and has caused water damage to the siding, sheathing and sill. 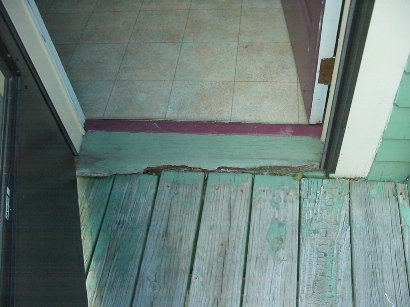 Deck elevation is to high causing damage to exterior door threshold. possible interior structural damage caused by inproperly installed flashing and existing damage allowing water to enter. further evaluation of this area will be performed during the interior structural part of this inspection additional comments can be found by going to the basement section question 5.4 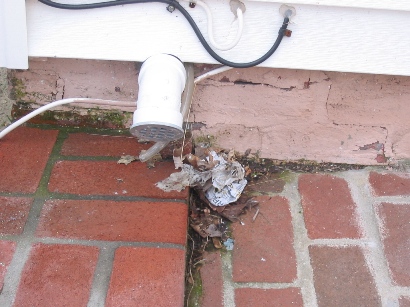 Heating system combustion gas vent is too close to the ground. this vent could easily become blocked by snow, leaves or any other object. possibly causing dangerous gases to back up into the home if safety’s fail. this needs to be corrected. 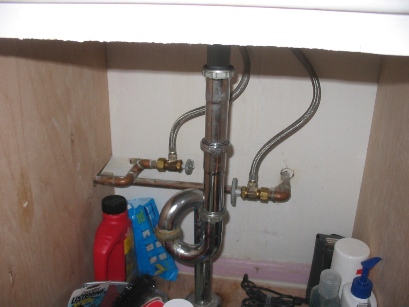 Older out dated s-trap with active leak recommend replacing with p-trap at this time. a plumber should be called for this work 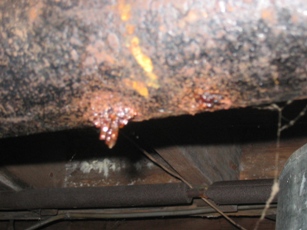 This cast iron piping is corroding from the inside out. although there is no evidence that the pipe is activly leaking at this time (no wet spots or stains on the floor below) it should be considered at the end of it’s useful life and replaced. 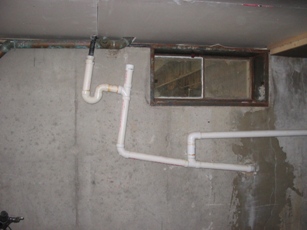 This is a good example of nonprofessional plumbing work. although this drain will function. you have to ask yourself what kind of repairs or improvements were made to this house that may not be vissible. the pipes need to be repaired at this time and the trap may not function as intended at this angle. 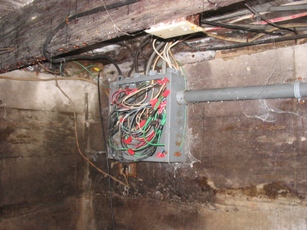 There is extensive amounts of moisture in the crawl space. if you look close at the floor joist you can see water drops on the bottom edge. this crawl space has a dirt floor and no moisture barrier the water is forming on all materials including the opened junction box. at this time the conditions appear to be reversible no major structural or mechanical deficiencies found. if moisture problems are not corrected asap costly damage is inevitable. 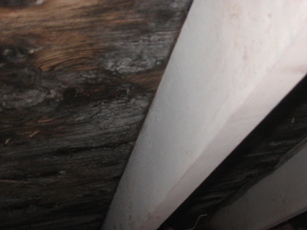 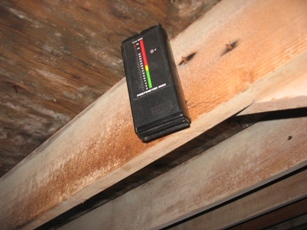 If you look close at the moisture meter in the picture you can see that the top red light is lit up.(this is to the left of the red bar at the top) this indicates extensive moisture build up in the attic. any reading above the green would indicate additional ventilation is needed. if you look at the picture just above this one you will see mold formimg on the roof sheathing and rafters. 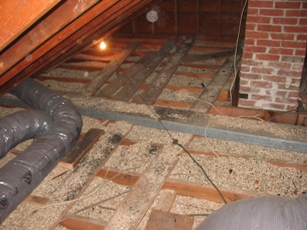 What you are looking at is called vermiculite insulation. vermiculite is a naturally occurring mineral that has the unusual property of expanding when heated making it light weight with insulating properties. proir to its close in 1990, much of the world’s supply of vermiculite came from a mine near libby montana. this mine had a natural deposit of asbestos which resulted in the vermiculite being contaminated with asbestos. asbestos is a carcinogen meaning if inhaled it can cause lung problems such as asbestosis lung cancer or mesothelioma. for more infomation on this please visit my web site click on the links tab then click on the epa link in the quick finder click on asbestos from there click on vermiculite. 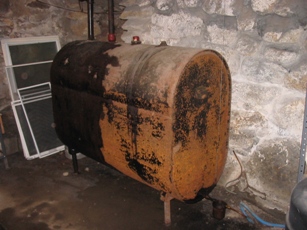 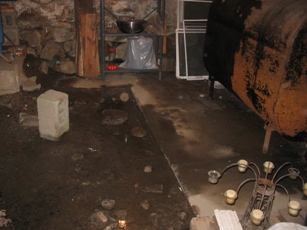 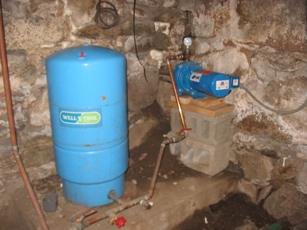 The oil tank in the top picture is leaking from the fill pipe as is evident by the staining that is visible on the tank and the active dripping that can not be seen in the picture. the middle picture shows the tank supported by a concrete slab and to the left of the slab is dirt. what you may not be able to determine from the middle picture is that there is a 2″ puddle of water over the dirt. on top of the water is a film of oil. the oil leaking from the fill pipe and runing down the tank is getting into the ground water. the bottom picture is the well equipment also supported by a concrete slab the well equipment is about 6′ from the oil tank on the other side of the puddle. the well itself is 15′ from the well equipment on the exterior of the home.  it is an open well with a make-shift cover as can be seen in the folling picture. the possibilty of the well water being contaminated is high and a advanced environmental health scan of the water is needed at this time. 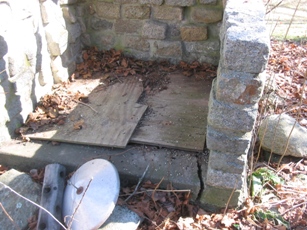 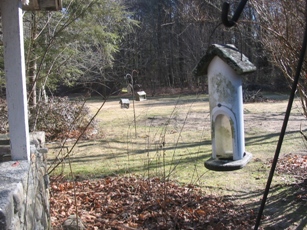 The first picture is of the well as you can see it is cover with plywood under the plywood is wood planks with large spaces between them allowing debris to enter into the well water. the well is located about 15 ft. from the home. just inside the home is the basement where the well equipments is located with the oily puddle. if you look at the bottom picture you can see the edge of the well the stone wall to the left. look to the center of the picture you will see bird feeders approximately 40′ from the well just beyond that 10 ft. or so is the septic tank cover, the minimum distance between a well and a septic tank is 100 ft. further reason for water testing, the well/septic proximity should be addressed during the title 5 inspection (fyi)